I just love this story. Schnauzers and mountains. Pretty much my perfect combination.

Following Atticus is the true tale of Tom Ryan and his amazing Miniature Schnauzer called Atticus M. Finch  (The M stands for Maxwell). Atticus Finch himself is the fictional character in author Harper Lee’s Pulitzer Prize winning novel of 1960, To Kill a Mockingbird.

Tom Ryan is an overweight, middle-aged, former newspaper editor who is probably too straight talking for his own good. He sort of inherits a Miniature Schnauzer and names him Maxwell. He immediately falls in love with having a dog and with Schnauzers in particular. When Maxwell sadly dies all too soon, he decides he can’t live without his doggy side kick and goes off to find another. Enter Paige the perfect breeder and subsequently Atticus and the relationships that change their lives for good and forever.

They set off together to climb the 48 mountains over 4,000 feet and surprisingly rather enjoy it, Atticus seems to be a natural and comes alive on the slopes nd makes hundreds of new friends. Through their climbing, they soon become recognisable figures and local celebrities.

After a friend dies of cancer, Tom is forced to question everything about his existence. Wanting to raise funds in memory of this friend, he decides that Atticus and himself are going to both climb 48 of the New Hampshire mountains within a single winter. Just for good measure, they aren’t just going to do it once, they are coming back for more and going to climb them all twice. These aren’t just slightly chilly winter conditions, they are full on freezing, murderous cold conditions that kill you if you make a mistake or don’t take it seriously enough.

What awaits the pair is a completely life changing experience for both of them. They face a hazardous few months encountering raging storms, frostbite and blizzards. It’s an unusual test of stamina that quickly becomes a soul-searching trip.

Within a month of returning home, tragedy strikes. Atticus goes blind. Blood tests suggest that there could be worse to come too.

Facing a much greater problem, Atticus and Tom undertake a trip together through darkness and into light. It’s a bit like Marley and Me, without Jennifer Aniston and Owen Wilson, but with the rather more likeable Tom Ryan and his gorgeous Miniature Schnauzer, Atticus.

Following Atticus is a beautiful heart-warming tale of love, selflessness, redemption, and above all, friendship.

Y0u can buy the ‘Following Atticus’ book or download the Kindle on Amazon here. 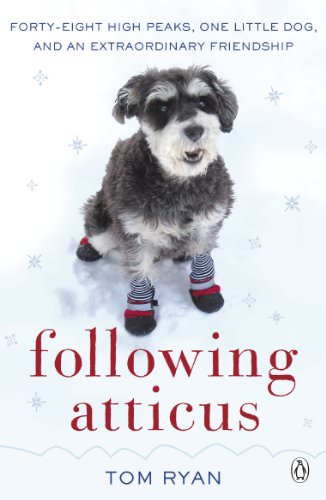 Tom Ryan has now climbed over 450 mountains over 4,000-feet in the last five years. I assume he’s not as overweight now.

Following Atticus is the remarkable true story of a man and a dog embarking on the challenge of a lifetime. This is author Tom Ryan’s inspiring tale of how he and his miniature schnauzer companion, the -Little Buddha- Atticus M. Finch, attempted to scale all forty-eight of New Hampshire’s four thousand foot White Mountains twice in the dead of winter. It is a story of love, loss, and the resilience of the human and animal spirit that’s as thrilling as Into Thin Air and featuring the most endearing and unforgettable canine protagonist since Marley and Me.

If you’d like to buy the book or download a preview, then you can find it on Amazon here.

Creating brands and building businesses in the Themed Entertainment and attractions industry. View all posts by Johnny Lyle

We want your videos for cash

Here at Mini-Schnauzer.com, we love Miniature Schnauzers and love videos of them even more, so we’d love to buy yours to use on the site.

We pay $50 cash for any videos we use. Read more here.